Education and Economic Growth: Investment and Distribution of Financial Resources 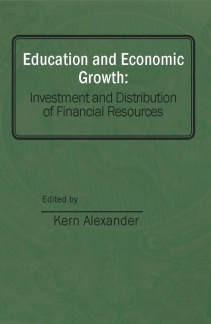 This book concerns the rationale for efficient investment of public financial resources in public schools and the equitable deplyment of those resources. It is a collection of the writings of scholars who have turned their attention to these issues and have published thoughtful articles in the Journal of Education Finance and its predecessor organization, the National Educational Finance Project. The Journal of Educaiton Finance has been published for 45 years and over that long period has been the source of many outstanding articles of which the shapers in this book are representative. The 19 chapters were chosen because they combine to present a comprehensive view of perspectives on the questions regarding the economic efficiency of investment in education and the redress of difficulties in the fair deployment of public monies among the many local education agencies in the United States. Important to the book is the idea that the public school is in an essential and pivotal position for the social mobility of the people from one generation to the next. Efficient and adequate public funding of well-regulated institutions of public instruction is, along with progressive taxation, public health, and certain other social transfer mechanisms, the primary means that government has at its disposal to redress the market forces that create and perpetuate great disparities in the wealth and income among the people. The public school, in particular, as a social institution, carries a huge burden in interrupting the cycle of poverty that is perpetuated by the market forces of the economic system. The downward draft of the cycle of poverty that is woven into the fabric of social and economic conditions by the rush of private and corporate self-interests places on the public schools a daunting responsibility. Unfortunately, as certain statistics in this book indicate, disparities in wealth and income in the United States continue to increase, and the state and federal government s tepid fiscal commitments to public schools, along with their unenthusiastic support of other social transfers, compared to other developed countries, has not served to abate the separation of economic classes and the building up of an underclass in the United States. As this book indicates, the economic rationale is well enunciated that supports increasing investment in education and the adequate funding of public schools. The various chapters are presented in a progression from the broad justification for overall investment to the actual measures that should be undertaken by state governments to provide adequate and just deployment of public funds among schools. The chapters are arranged into two parts. Part I sets forth the arguments concerning the idea that education is a productive investment in the knowledge of the people and serves as a catalyst, indeed the condition precedent, for economic growth and viability of any nation. Part II deals more directly with the reasoning supporting the importance of adequate funding of public schools and the equitable distribution of funds among school districts in the 50 states.

Authored and Edited by Walter W. McMahon and Jennifer A. Delaney

World of Children: Perceptions and Connections in Sustainability with Reflections during the Pandemic

The Education of Young Children: Research and Public Policy