Investigating Diversity: Race, Ethnicity, and Beyond 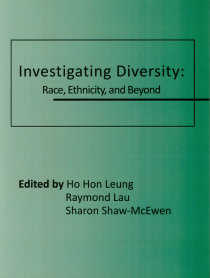 Investigating Diversity: Race, Ethnicity, and Beyond

Ho Hon Leung, Ph.D. is an associate professor of Sociology at State University of New York College at Oneonta. His research interests include ethnic relations, immigrants, ethnic aging, and globalization.

Raymond Lau is an architect currently working for a world renowned architectural practice, Zaha-Hadid Architects in London, UK. He is researching the relationship between architecture and ethnic identity.

Dr. Sharon Shaw-McEwen is a Professor at Middle Tennessee State University in Murfreesboro, TN. She directs the MTSU Scholars Academy for gifted, talented but underachieving and underserved college students

Charles Amissah is an assistant professor of Sociology at Hampton University. His research interests include stratification, inequality, diaspora, and African immigration. He is currently researching the experiences of African immigrants in the United States and Europe. He is also a mentor in the UNCF/Mellon Foundation Programs.

Yolanda Elaine Childers is an enrolled member of the Mvskoke (Creek) Nation of Oklahoma. In 1991, she was an Anthropology Instructor at Southwest Texas State University. Later she returned to Oklahoma in 1995 to take up the position of Curator/Director of the Creek Council House Museum and also to begin teaching at Tulsa Community College (TCC) as a Cultural Geography Instructor. For the past 5 years, she has taught English and Reading in the Tulsa Public School District, as well as continuing to teach at TCC. When she is not teaching or reading, she likes to work with animals. She is licensed to rescue animals, and she also volunteers with the Tulsa Animal Shelter as well as other animal rescue organizations in the Tulsa, Oklahoma area.

Scott Finnie, Ph.D. is an assistant professor of Africana Education Program at Eastern Washington University. He is the author of several other articles on affirmative action, has taught at Eastern Washington University and throughout the greater Spokane area for the past 16 years. He also owns a consulting business that provides cultural competency seminars and diversity training.

Raymond Lau earned his bachelor degree from School of Architecture, McGill University, Canada, and furthered his study at the Architectural Association in London, UK. He is currently working for a world renowned architectural practice, Zaha-Hadid Architects in London, UK, on projects in the middle-east and Asia. In February 2007 he took home the runner-up prize in a competition to design innovative housing for sites across Europe, organized by Europan8. In his on-going collaboration with Ho Hon Leung, he solidifies his interest in exploring the relationship between architecture and ethnic identity.

Carol Leinonen, Psy. D., L.P., P.A. is a child and adolescent therapist and has a private practice in Southern Minnesota. She is currently preparing her "Culture of Children" paper for possible publication.

Ho Hon Leung, Ph.D. is an associate professor of Department of Sociology at State University of New York College at Oneonta. His research interests include ethnic relations, immigrants, ethnic aging, and globalization. He has developed a new research interest in ethnic identity and architecture with Raymond Lau. They are writing a book on the convoluted relationship between ethnic identity and architecture.

Dr. Julian Madison is an associate professor of History at Southern Connecticut State University. He has maintained an active research agenda which includes the culture of Philippine women and the desegregation of professional sports in America. He is currently working on a manuscript about the patronage of Black artists during the Harlem Renaissance.

Sharon Miley is a Senior Lecturer in the Department of Sociology at Texas State University—San Marcos focusing on multicultural relations and diversity, social stratification, popular culture and society, and the sociology of popular music. Her current projects include “popularizing” the department’s minor in Popular Culture.

Olatubosun Ogunsanwo, PhD, is a professor of Liberal Arts at The Cleveland Institute of Art. His interest is in the interplay of Western and non-Western literatures, and has published a number of articles on both literatures. He is increasingly interested in the intersection of literature and ideology in our world today as it becomes an increasingly global village.

Dr. Sharon Shaw-McEwen is a national consultant, a Full Professor of Social Work and the Assistant to the Vice-Provost for Institutional Diversity at Middle Tennessee State University in Murfreesboro, TN. She has provided technical assistance to substance abuse prevention, mental health, and educational programs for African-American families and children across the country. At MTSU she also directs the MTSU Scholars Academy for gifted, talented but underachieving and underserved college students with a focus on a 100% graduation rate.

Starita Smith is affiliated with University of North Texas. She is currently completing her doctoral degree in sociology at the University of North Texas in Denton, teaching sociology at UNT, and occasionally writing columns for the Progressive Media Project that appear on editorial pages of daily newspapers in the U.S. and Canada. Her dissertation topic is about people who are often mistaken for being members of different racial groups than the ones to which they actually belong.

Susan Rawlins retired from library and literacy work in 2006. For eight years she directed the Colusa County Free Library and, prior to that, was director of the Willows Public Library and Literacy Programs. Her continuing activities include writing, composing, gardening and playing the organ on Sundays for the Trappist monks at Our Lady of New Clairvaux Abbey.

Dorothy L. Renn is a professor at St. Cloud State University. She will publish her memoir, "Mother's War Crimes Trial" online, in the fall of 2008, under the pseudonym Abigail Briar at http://www.abigailbriar.com. She is available to speak on the plight of children in a world that neither respects nor understands them. She is currently working on a book tentatively entitled, "Comparing Child Abuse to Torture."

Billie P. Terrell, Ph.D., ACSW, is the chair and the director of the Master of Social Work program at University of St. Francis. Her research continues to have a clinical multicultural perspective. Her research projects have varied from mental health, parenting, to clinical treatment models. Her current research focuses on clinical services available to veterans returning from Iraq.

Carolyn Williams is an associate professor of Department of History, and the Co-Director of the Bette Soldwedel Gender Research Center at University of North Florida. Her teaching and research areas are Gender Studies, Multicultural History and Public History. Her book, Historic Photos of Jacksonville, was published in 2006.

Authored and Edited by Walter W. McMahon and Jennifer A. Delaney

World of Children: Perceptions and Connections in Sustainability with Reflections during the Pandemic

The Education of Young Children: Research and Public Policy